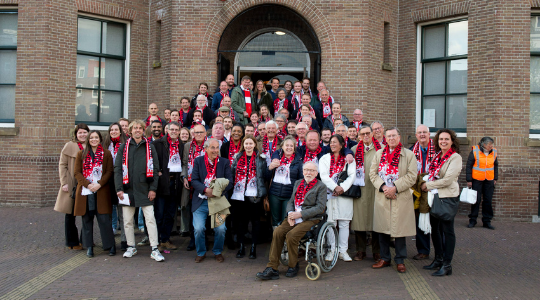 The castle went up in flames.

Regularly—for these were the flames of passion; and ‘The Castle’ is the name of the football arena where the alumni club held its most recent event.

As the afternoon rounded down, our members were warmly received in the ‘Ridderzaal’ (the Knight’s Hall) where Rob Westerhof shared his insights into the field of football before taking us on a journey through his past. Memorable stops in his story were his becoming an assistant sheriff on the O.J. Simpson case in America, and his singing the Sparta club anthem before thousands of curious marketgoers as visitor in China.

Rianne Schorel provided an intermission, talking about her career as a pro footballer which was ended by a concussion. She has since set up Move The Brain, an organisation helping others also affected by concussions, and they have booked great results with their unique approach.

After a buffet dinner, we were given Sparta shawls, entrance tickets and break-off consumption chips, and we marched around the stadium to get to the Jupiler Lounge. At first, the field itself was searingly empty—a void brimming with expectations. But as the people mingling in the lounge swarmed out and filled the business-class seats and the rest of the stadium filled up, the players took to the grass. Fireworks shook the stadium and further lit up the red-striped players and the purple-clad ones. Sparta versus AZ.

Then kick-off, and the game was afoot. With the match having been rescheduled to the evening, the sky soon grew dark, but the pitch remained a bright land of its own. If the red-and-white Sparta players lost, their club could be removed from the premier league. The game was high-stakes, but the spirits of fans all-around were high. Songs were sung. Drums were beat. And shots were taken; every chance for a scored goal the ball became one fired out of a cannon, pulsing with the heartbeat of the crowd. Of those who wanted it to go in and those who wanted it to miss, only one group could get their wish. Just as the second half started, that desire was fulfilled for AZ fans, the one-nil. Sparta fought tooth and nail the rest of the 45 minutes to level the score; without success. Then extra time came, and by a stroke of luck, or skill, or both, Sparta was given a penalty shot. And the explosion that went off around the pitch confirmed: they made it count.

Many of us had been visitors in the Sparta lifestyle, but we had felt right at home.

To the next one!