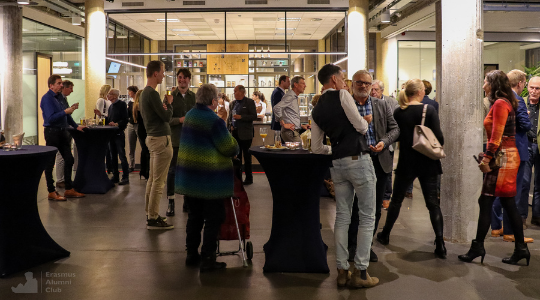 The Desiderius Day event of the Erasmus Alumni Club took place in the VNAB center, located on the Boompjes in Rotterdam. The space offered a view of the Erasmusbridge. As the sun set, people trickled in, meeting or reacquainting. Eventually, the chairs were filled.

Derk Loorbach stepped on stage to explain in booming voice the inner workings of ‘regimes’—dominant systems of working and thinking. Transitioning from a regime that's harmful to the climate can be challenging because the usual approach from insiders is aimed at making a regime ‘less bad’ (‘optimising’) which may not be enough to secure a future on our planet. With DRIFT, Derk hopes to publicize transitions backed by scientific study.

As vice mayor of sustainability, Arno Bonte, the second speaker, is actively trying to change the current system. With a balance of humour and earnestness he clarified his position and the need to optimize at times, to deal with the occasionally counterbalanced desires from the people of Rotterdam. He advocated a realistic caution in our strategy but was positive we’re en route to a much better 2030.

After the last round of questions people moved to the bar area to amiably chat about life and, presumably, the climate. Like they had done for the future of Rotterdam, the two speakers had made a big impact on the audience present.